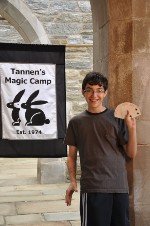 Andrew Galanter has been avidly studying magic since the young age of three, when his father bought him a magic kit in an attempt to stop his endless crying. He did stop crying but he also formed a long-term hobby: magic. Andrew's favorite magic is card magic and is the only magic Andrew performs. He currently lives in New York, where he spends his time performing card tricks for anyone willing to watch. Some of his magical influences are: John Bannon, Brother John Hamman, and John Guastaferro.