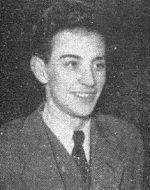 At age 10 inspired by and learned from a birthday gift box of tricks and amateur close-up magician since. Dealer (manager of Davenport's branch in Glasgow) since 1955. Son-in-law of George Davenport, having married in 1959 the latter's younger daughter, Jean (born 1937). One of the creative cardmen in the United Kingdom, inventing Collectors (by 1969), Impact, and Cardwarp (1974). Teacher of Gordon Bruce.