A Rowing Machine which Generates Electricity

After I had too much pain in my knees running, I decided to switch to a lower impact exercise. The obvious choice would have been cycling, but I discovered rowing and liked the fact that it trains more muscles, because it also exercises the upper body. I like to be efficient with my exercising. I don't have all day just to exercise. An exercise that engages more of my muscles is therefore more time efficient. It also produces lower joint impact than running. Cycling is even lower impact than rowing, but I am not yet at that point where I need it. Therefore the decision was clear to me - I will row to stay fit.

But I wanted another feature. I wanted that my rowing machine was capable of generating electricity. I find it silly to have work, which is generated exercising, being wasted when one could convert it to usable electric energy. But nobody was offering such a rowing machine. I would have been perfectly fine to purchase such a machine. For bicycles one can purchase a variety of add-ons to turn a road bike into a stationary bicycle and generate electricity. For rowing machines this is not available. As an engineer this meant I would build one myself.

After a few quick calculations and estimates it was clear that with human power from an individual one cannot generate that much electric energy. It is not possible to run your home with a few minutes or even a few hours of rowing every day. But it is a great emergency generator, because with the row-generator I built one can produce a lot more electric power and sustain it for a lot longer time than with any hand-crank generator. An untrained healthy average adult can sustain about 100W electric output for longer periods. Try that with a hand-crank generator. Most can't even output 100W no matter how hard your crank the handle.

In Massachusetts, where I live, a kWh costs me currently $0.23. Rowing for an hour each day would generate about $10 worth of electricity each year. Not that much, but still infinitely more than just moving air and creating heat, which produces zero usable electricity. To build my machine you will have to spend about $800-$900, but I will explain how the cost can be lowered to $400. This means it would take decades to earn back the cost of the machine. Clearly this should not be your primary motivation to build this rowing machine. In an environment where several people use the machine and you get about 4-5 hours of use each day, like in a gym, or a large family, the calculation changes. The final cost of the machine is flexible because there are some non-essential parts which you may or may not include. The biggest cost is the 600W generator I am using which costs almost $330. Unless you are an athlete and you need that much headroom in the power you generate, it is perfectly fine to use a smaller generator something in the 200W - 400W range. This by itself will lower your cost by $100 - $200. There are other things you can do to even get the total cost down to $400.

Over the course of several weeks I tested, tinkered, built, and refined my machine. I looked at existing rowing machines and learned from them. I combined this with my own ideas. I used partly components which I had lying around and with which I was familiar with, and I used components I never had anything to do with. As an electronic engineer it was fairly easy to design and build the electric subsystem, but even there I learned and experimented a lot, because my expertise is in microelectronics, not power electronics.

If you are interested to build the same or similar rowing machine, or if you simply want to find out more, how it works, and how it is put together, the best is to get my Build a Rowing Machine which Generates Electricity ebook. It will save you time and money and includes all the details. I will provide here an overview of some of the most important components and subsystems making up my rowing machine. Below you see a photo of the finished machine in my workshop where I put it through its paces. 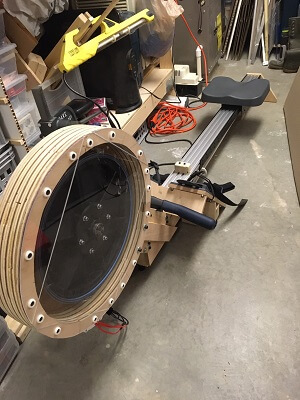 A rowing machine requires a seat that travels in a straight line back and forth, a place for the feet to push off from, a chain or belt with a handle you pull on, a retraction mechanism that pulls the chain or belt back into the machine, and some way to generate resistance against which you pull.

The biggest difference of the various machines on the market is in how the resistance is produced. The most widely used rowing machine, the Concept2, uses an air fan. Other machines use fan blades that move in water. Cheaper machines use bungee cords, shock absorbers, or magnetic resistance by exploiting eddy currents. My machine uses an electric generator. The faster you pull, the faster the generator turns, the more resistance you will have to overcome, and the more electricity you will generate.

I am using a 3-phase generator. A full-bridge rectifier converts it to an unregulated DC voltage. This is fed into a 12V lead acid battery, which in turn feeds into a grid-tie-inverter which converts the generated power and feeds it directly into the home electric grid. The peak output I can currently generate is 200W. Averaged over longer periods I achieve about 100W. (I am in my early 50s, I am not a rower, and I haven't exercised much for the last 30 years. I am certainly not in shape, but I am healthy and I was an athlete during my youth. I would say that I am about average for an adult in my age group.)

As I write this, I have been rowing daily for several weeks on my rowing machine and I really love it. It is a great exercise and it creates a warm and cozy feeling to know that the energy I create does not go wasted, but is fed into the grid, no matter how tiny the financial return is on it. The only exercises I do to complement my rowing are calf-raises, push-ups and planks. Planks wouldn’t even be necessary because with rowing you do exercise your core, but they are such a great exercise that I do them regardless.