The Fishing Voyage of the Good Ship Anita

This is a 15 minute silent black and white motion picture showing Ernest Hemingway in his prime fishing marlins together with some of his best friends: Joe Russell, Charles Thompson, and Raymond White. The film was shot by Raymond "Bud" White with a 16 mm Bell and Howell Filmo 70 camera.

The good ship Anita hailed out of Key West, Florida, owned and skippered by Hemingway's friend, Joe Russell, the founder and owner of Sloppy Joe's Bar. The destination of the trip was just off of Havana in the Gulf Stream - Hemingway's first great marlin hunting expedition.

Hemingway immortalized with his novels not just himself but several of the people seen in this motion picture.

Joe Russell was the owner and skipper of the good ship Anita, a fishing boat for hire and rumrunner hailing out of Key West. Hemingway dubbed Russell, "Josie (or Joe) Grunt". The writer thinly disguised Joe Russell as Freddy Wallace, owner of "Freddy's Bar" in To Have and Have Not. Freddy Wallace's charter boat "Queen Conch" was obviously patterned after Joe Russell's "Anita".

Charles Thompson was Hemingway's best friend in Key West. Charles and his two brothers were well-to-do residents of the island town. They owned and operated the hardware, ship's chandlery and tackle shop, an icehouse, a cigar factory, and at times a turtle meat cannery. Charles picked up his alias, "Old Karl", from a German hunting guide on his first hunting trip to Wyoming with Ernest in 1930. From their first meeting in Key West in 1928, they formed a sportsmen's bond that Hemingway wrote about in The Green Hills of Africa.

Oley Holyson: This is an indirect reference, a homage, to Zane Grey, who turned Hemingway on to deep-sea fishing with his writings. Later Hemingway became close friends with him. Zane Grey was just like Hemingway an outstanding storyteller and writer but was also a pioneering angler, a great innovator, and one-time holder of more than a dozen saltwater world records. Zane Grey was inducted into the IGFA (International Game Fish Association) Hall of Fame in 1998. Ernest Hemingway was among the early officers of the IGFA. Hemingway during mid-summer 1928 read with relish Grey's book on deep-sea fishing in Tahitian waters, and in his enthusiasm for it bought copies to give to friends. We know that Zane Grey was not aboard, but in spirit he was, and thus Hemingway and White added him in disguise to the cast.

Ernest Hemingway was the protagonist of the voyage. A writer, Pulitzer and Nobel Prize Laureate who eventually "was driven far out past where he can go." The Isaac Walton appellation of course refers to a fisherman. The "splicer of the main brace" is a person preparing and serving the drinks. Both fitting appellations for the great man and leader of "the Mob".

Pauline Pfeiffer Hemingway was a Vogue magazine writer, married Ernest in 1927; his second wife and mother of their sons, Patrick and Gregory born in Kansas City while the Hemingways stayed with the Lowrys and visited with the Whites.

Helen White was wife of Raymond B. White in 1932. A deep-sea fisherman in her own right.

Raymond B. White was an amateur filmmaker who exposed many reels of 16 mm film on numerous trips. It is not surprising that he hauled aboard his Filmo 70 camera to record brief impressions and highlights of this sea-going adventure. White's half-sister Arabell had been married to Ernest's uncle, Alfred Tyler Hemingway. White's sister Ruth was married to author Malcolm Lowry. The Hemingways were guests in the Lowry Home in Kansas City, in 1928 and 1931 during the births of their two sons.

The value of this film has been further enhanced by the existence of the "Fishing Log - HMS Anita" from this trip. The log describes such details as how many, which and when fish were caught, how often they jumped, which bait was used, and how much of a struggle it was. 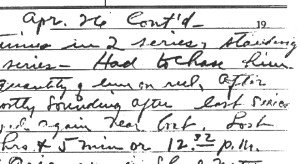 This motion picture has been professionally appraised and assessed by C. Cameron Macauley in a 150-page report. Mr. Macauley describes in minute detail everything known today about this motion picture and its numerous links to other historical documents and Hemingway's life.

This film is unique and unlike anything else that has been preserved documenting Hemingway's life. It documents his love for deep-sea fishing and in particular for fishing marlins. It so wonderfully illustrates his inspiration for his best-selling novel The Old Man and the Sea. Depicted on the film is a little dinghy which quite likely planted the seed of his most famous story.

Additionally to the black and white film we have a short one-minute silent color film from 1952 shot at the Hemingway's Cuban estate, La Finca Vigia in Cojimar, Cuba. It shows Ernest Hemingway, Mary Hemingway, Mrs. White and Raymond White on the terrace overseeing Cojimar. This was a time where Hemingway was finally fully recognized and at the height of his fame enjoying the intimate friendship of a few special friends. This is the very time described by most critics and biographers of Hemingway, as well as he, himself, as his most inspired and productive. The Old Man and the Sea was written and published in that very same year, 1952. Hemingway won the Pulitzer Prize in Fiction in 1953 and the Nobel Prize in Literature in 1954. 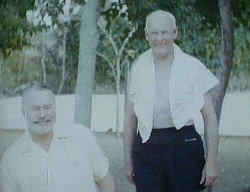 These two films are available for sale and commercial licensing to collectors, aficionados, benefactors for museums, universities, and libraries, public and private cultural and educational trusts and creative media outlets. If you have a serious interest please contact us preferably by email. We will only answer those emails which include