In the mid 90s I played around with incorporating electronics into magic. Anverdi had a great idea where a box would close just before a spectator selected card could be placed inside it. I didn't like the mechanics of his box, which was a box for two decks where one half was used for the electronics and the other half for the actual action. The sliding lid of the box would slowly close. Here is a video for the original Anverdi box:

After I read Anverdi's book I could build the variation I had in mind. The effect is identical. A deck of cards is introduced. All cards are different and there is a genuine free choice for the spectator (no force). The spectator himself could drop the cards into the box. The box I built does not have a sliding lid but a regular flapping lid. It closes just before the spectator card can be dropped into the box:

I think that my version looks a bit more magical. My goal was to build a box where it is not immediately clear what closes the box. The electronics are hidden in the boards of the box. What I built is only a prototype some 20 years ago, so the walls of the box are way thicker than they have to be. There is no reason why this could not be made to fit into a 1/4" thick board today. I am not using a motor as the actuator for the box as Anverdi used for his box. The electronics is all pre-microcontroller age.

It appears that Joao Miranda has copied my idea of the more magical closure mechanism without credit for his haunted box. Theft is a common thing in magic. At least now you know who came up with it first more than 20 years prior to Miranda.

Oh my was it fun to build electronics. The smell and smoke of solder and burned flux still lingers in my nose. Below a photo of the inside of the box. 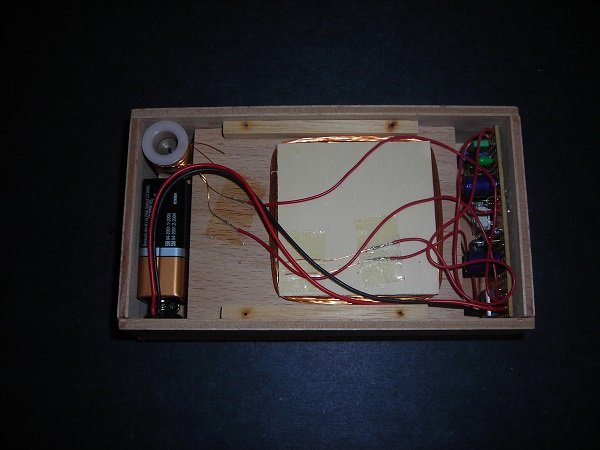 And here I show the guts of the electronics clearly visible. Everything neatly built on a little prototyping board. 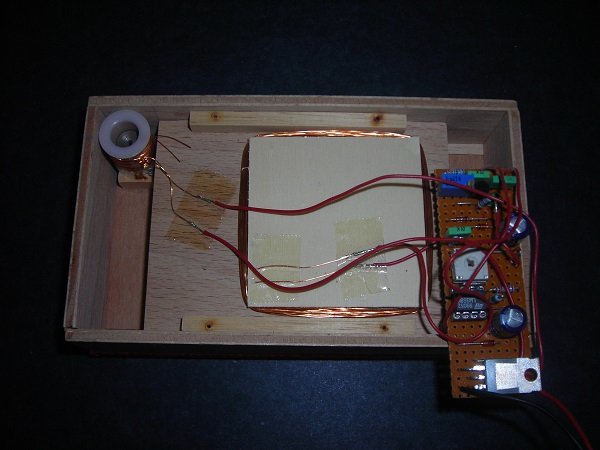 which system did you use? Does it look like a metal detector to me? I thought at first that the effect was produced by a reedswitch and a magnetized card. Could you pass the electronic circuit of the book? or inform which system you used? thanks.

Thank you Chris for you gentle reply, but even if I had no knowlege of electronic, I would have a friend of mine that might realize it, and for that some tecnical indication could be useful. Obviously if you are some itention of sell in the future, my request it to be considered nothing! Thanks

Massimiliano, I am sorry but if you do not have any notion of electronics you will not be able to recreate it. After all, it is an electro-mechanical device. I have currently no plans to make any for sale, but that could perhaps change at some point in the future.

obviously you would have my eternal gratitude, as well as anyone else who would help me in the realization of this beautiful project. thank you in advance!

Hi, I was very surprised by the beauty of your creation, for this reason, could you share how to realize your haunted box? I don't have any notion of electronic, your photos are clear, but I would be grateful if you explained to a neophyte like me how to make it, among other things nowadays the components would be even easier to find and even cheaper.

I actually have one of the Barking Dog sets but I believe that it is activated by a gimmicked card, possibly on the same lines as you have used? The apparatus I have has an on/off switch to start it up plus another switch to "set-up" the dog. There is also a button on/off switch which does activate the dog but this means that the spectator does not have the cards and the magician has to activate the movement of the dog. It really should be activated by the spectator dealing the cards but that leads to my question. How does the card activate whatever switch is applicable? I am not into electronics, so any help would be greatly appreciated.

I for one would also be interested to see your notes or reverse-engineered diagram if possible! Or alternatively your ideas to update it with a microcontroller

I built this 30 years ago. My notes are most likely lost. I might have the circuit diagram somewhere in a box deep in my basement, but it is not something I could search for easily. But as far as I can remember the electronics is for the most part the way Anverdi describes it. I still do have the box and it would be possible to reverse engineer the circuit directly from the board. But electronics has advanced and I think this could be built much better differently with a 50 cent microcontroller.

Hi, Read with great interest your development on the Anverdi box. Would you mind sharing the electronic workings?