An American Cowboy - after all

Lucky Luke, a famous cartoon character, has been a beloved fictitious cowboy in Europe for the past 60 years bringing joy and entertainment to many readers and audiences. A recent discovery has unveiled the fascinating fact that the original character of the Lucky Luke cowboy was created by an American, Arthur A. Dailey, at least as early as 1934. Mr. Dailey, in 1934, created and wrote a series of radio programs for boys and girls around the main character "Lucky Luke" – a cowboy who had many adventures in the Old West.

Prior to writing the Lucky Luke show, Mr. Dailey wrote the "Lone Wolf Tribe" radio show in 1932. A station line-up from October 1932 shows a long list of stations in the major cities in the continental United States. Both were shows for young boys and girls based on Mr. Dailey’s love and life in the West where his characters originated – such as Chief Wolf Paw and Lucky Luke. The shows aired from the WBBM Air Theater in Chicago and were sponsored by William Wrigley Jr. Company and The Ice Cream Manufacturers Company of Cook County respectively. Actor and movie star Don Ameche was the narrator for the Lone Wolf Tribe. Listeners were given the opportunity to join the Tribe and receive the secret official Lone Wolf pin as well as the beautiful Lone Wolf Tribe book – once they sent in enough gum wrappers to qualify for the prizes. By the same token, the Lucky Luke show offered a contest and prizes, too – roller skates, bicycles, genuine Ingersoll Micky Mouse wrist watches and even a real live Shetland pony.

We have uncovered many scripts of the Lucky Luke radio shows. Below we show a snippet of one entitled – "Lucky Luke rides with Death" – where he described in vivid detail a cattle stampede incidence. The handwriting on the script is Arthur Dailey’s who made a few corrections before the show aired.

WBBM aired the first "Lucky Star Ranch" radio show on June 2nd 1934 at 5:45pm. Below is an example of the relevant section from Chicago Tribune's "Today's Radio Broadcasts" section confirming the airing date and time. 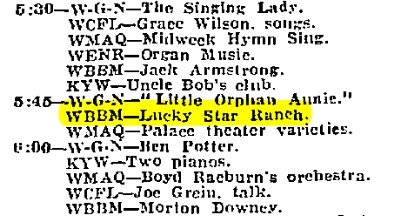 We thank Chuck Howell, curator of the Library of American Broadcasting at the University of Maryland, who found the listings of the Lucky Star Ranch show in the Chicago Tribune. These radio shows aired every Saturday, Tuesday and Thursday.

Similarities Between Original Scripts and Comics

It was only in December 2008 that the Dailey (American) Lucky Luke radio scripts were discovered, and after careful thought and research, the link to the Morris (Belgian) Lucky Luke was made. With great respect and admiration for Morris and his furtherance of the Lucky Luke creation, we proceeded to compare his work to Dailey’s radio scripts.

Exactly how, when, and in what form Morris obtained knowledge of the Dailey Lucky Luke has yet to be established. However, there are numerous similarities between the original Dailey scripts and the Morris comic stories. Consequently, Morris must have known or heard about Dailey’s Lucky Luke, and used this knowledge to derive his masterful comics – still so appealing after all these years. At any rate, in comparing a few of Dailey’s radio scripts with the adventures in Morris’ early stories, we find the following:

Arthur Dailey developed his stories from his long time first hand experience of the West. The Lucky Star Ranch on which Lucky Luke works was inspired by Arthur's experience of his many years on Eatons' Ranch. Arthur started to spend his summers on Eatons' Ranch in 1912 and he returned to Eatons' until his death in the early seventies. Over the years he filled every role at the ranch from cook and waiter to wrangler and dude. Many of these experiences found their way into Lucky Luke stories. In the early twenties Arthur created Eatons' own newsletter the Wranglin' Notes. For this publication he created a unique masthead illustration shown below.

A few years later in the early 30s the Lucky Star Ranch radio shows aired featuring the adventures and stories of Lucky Luke.

In speculating on this link between Dailey and Morris, we know that the Dailey Lucky Luke radio shows were widely heard in the continental United States. Is it possible that in 1934, or somewhat later, these radio shows were also broadcasted in Europe, perhaps the UK, or to some other radio station throughout Europe with broadcasts in English? Another way these stories could have found their way to Europe and to Morris is via the radio script writing courses Dailey taught at Northwestern University. Could Arthur have used his real radio scripts as examples and reading material in his classes? Maybe this reading material found its way to a European university or European students from where it found its way to Morris. Further, thousands of Europeans visited Eatons', the first dude ranch in the world, to experience the life of a real cowboy. Dailey spent every summer on Eatons' ranch. He was employed there in every possible function from cook, waiter, wrangler and seasoned dude. He was an integral part of Eatons'. His magnificent photos are covering to this day the walls of Eatons'. Anybody visiting the ranch would certainly get to know Mr. Dailey, either in person, or through his photos and his legacy at the ranch. Any of these Europeans who visited during the 20s, 30s, and 40s could potentially have communicated the information about Arthur Dailey to Mr. Morris. Arthur Dailey also exhibited his wonderful cowboy photos in Europe in photographic salons. Another avenue how Morris right there in Belgium could have learned about Arthur Dailey and his work as Western photographer, illustrator and story teller.

Looking at all these multiple ways of how the information of Arthur Dailey's stories could have been transported to Europe, one understands that it is not a mystery anymore how Morris could have learned about Arthur Dailey and his stories.

In any case, we are hoping that, with the publishing of this information, we may hear from people who may be able to shed further light on how this history evolved. It is also hoped that, with this discovery, Lucky Luke will enjoy even greater success. The interesting part for all concerned is that this information has come to light - now, 75 years later.

All comments are welcome!

Arthur Dailey as a Story Teller and Illustrator 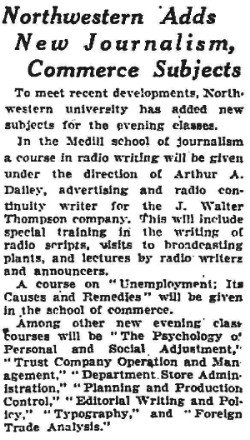 Before creating all these stories and almost before he started taking pictures, Dailey expressed himself through illustrations, cartoons, and comics. He was involved in publications as illustrator, designer, photographer and writer. But above all Arthur was a story teller. He told stories in his early illustrations for the Daily Illini. He was the first to teach radio script writing classes and did so at Northwestern University in the Medill School of Journalism as the article from the Chicago Tribune from 29th January 1932 describes.

Arthur Dailey loved the Old West. He was a founding member of the exclusive club, The Westerners, and he spent a significant amount of time living the life of a cowboy. This first-hand experience informed his writing of western stories and adventures.

Mr. Dailey shot hundreds of magnificent photographs depicting the lives of cowboys. Arthur is somebody who mixes every aspect of his life with the images of the Old West. It is not a surprise that he created Lucky Luke, a cowboy with fascinating stories to tell – and the Lone Wolf Tribe – all stories based on the many tales he heard listening to and working with cowboys and Indians.