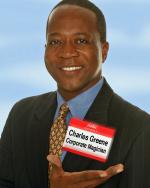 Charles Greene III is a corporate magician. Ionia Magician Princess: Secrets Unlocked is his first major book. When not writing, Charles creates magical marketing presentations for his Fortune 100 clients, which include American Express, Frito-Lay, and Johnson & Johnson. So unique is Charles’ magic work for corporations, he’s been featured in The Wall Street Journal, Robb Report, and Sales and Marketing Management Magazine.

In the area of magic history, Charles is a respected collector. His home in Washington, DC houses the largest private collection of vintage magic posters in the city. Through his site MagicPosterGallery.com he shares information about magic posters from 1890 - 1930. At history conferences in Europe and the U.S., he has spoken on the subjects of poster collecting, stone lithography, and poster restoration.

He’s been tutored by Doug Henning, awarded by Siegfried and Roy, and selected as a guest docent in David Copperfield’s exclusive International Museum and Library of the Conjuring Arts. The International Brotherhood of Magicians has awarded Charles as America’s best close-up magician. The top four magic industry journals have featured Charles as their cover story. He’s performed at Hollywood’s The Magic Castle. He is a gold star member of London’s The Magic Circle.

So unique is Charles’ magic work for corporations, he’s been featured in The Wall Street Journal, Discover, Robb Report, and Sales and Marketing Management Magazine.