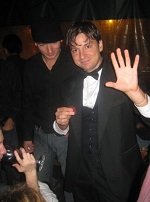 Cristian Vidraşcu was bitten by the magic bug at the age of nine, and has been performing as an avid amateur ever since. His interests include stand-up, strolling, and impromptu magic, as well as mentalism. He has also done magic on the streets of Alexandria, Virginia, and can attest that the street is the toughest performance venue (but at the same time, the most formative).

He strives to create original premises for his magic creations, and has recently decided to publish his ideas.

He can perform in a few languages, and has performed in various countries, including formal shows in the United States, Romania, and the United Arab Emirates. He is a past president of the Washington DC assembly of the Society of American Magicians.

His favorite book on the art is Greater Magic, by John Northern Hilliard. Other favorites include The Amateur Magician’s Handbook, by Henry Hay; The Books of Wonder, by Tommy Wonder; and Messing with Minds, by James Biss. Other authors he enjoys are U.F. Grant, Tony Binarelli, Rick Maue, and many more.