The Magician's Dream: a practical solution for any card at any number
Tommaso Guglielmi
$13 ★★★★★ 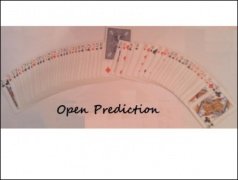