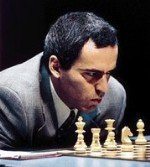 Garry Kasparov is generally regarded as the greatest chess player ever. He was the thirteenth World Champion, holding the title between 1985 and 2000. His tournament record is second to none, featuring numerous wins in the world's major events, often by substantial margins. As well as his outstanding successes, Kasparov has constantly promoted the game; he has done more than anyone to popularise chess in modern times.