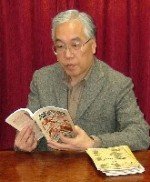 When Hideo was thirteen years old, he purchased a book of card magic for beginners but he didn't have a deck of cards. He went to a department store to buy one and asked a saleslady, 'Where can I buy a deck of cards?' She asked, 'What are you going to use it for?' he answered, 'To perform magic.' She pointed to a corner of the store where there was a Tenyo Magic Counter. He had never known that magic apparatus was sold to the general public. He bought a set of Multiplying Billiard Balls and both marked and stripper decks. This was the beginning of his magic career.

He went to work part-time as a magic demonstrator for Tenyo when he was nineteen years old while attending college. This experience inspired him to become a member of the Tenyo Company. His first major contribution for Tenyo was not in the magic line but with their puzzles. He created some puzzles, which were variations of Pentomino, which were Tenyo best sellers in those days.

Tenko Hikita and Haruo Shimada were Tenyo members as magic demonstrators. Because of this he was interested in becoming a stage magician. He then studied music to train his singing voice hoping to become a 'Singing Magician,' which is how he performed four different times on television. He also appeared many times in different venues on varied occasions, but those memories as a performer ended when he decided to start publishing magic on his own and left Tenyo.

He opened the Kato Magic Studio and started to publish. The most notable incident in this period was learning magic from Tenkai, who had a column in his magazine. This column came to a conclusion with Number 7. Upon finishing a session with Tenkai, he died while Hideo was on the Shinkansen train from Nagoya, where he lived, to Tokyo. When Hideo arrived home his mother told him that his friend in Nagoya phoned to inform him that Tenkai had just died. Hideo immediately took the next Shinkansen back to Nagoya.

Publishing his magazine and books was not a success and he had to give it up. When he was looking for a new job, Mr. Akira Yamada (the president of Tenyo at that time) invited him to come back to Tenyo.