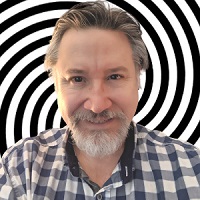 The Online Mentalist (also known as John Stamas) as a kid magician received a tremendous amount of local media coverage. This occurred especially at age 16 for a play that he wrote and directed. This project was part magic show and part storyline about a prestidigitator confronting good and evil. At age 18 he made that stage performance into a feature length Super 8 film that caught the eye of August Coppola, the brother of filmmaker Francis Coppola (“Godfather” films) and the father of Nicolas Cage. John was grateful to August for the apprentice opportunity, which included making a student film featuring Nic Cage. But after three years in Hollywood as August’s assistant, Stamas decided that the film industry was not for him. Due to a media opportunity, he eventually wound up in New York City in 1988 where he still lives to this day. Throughout the years Stamas has either directed or had as marketing clients, artists who have won Oscars, Emmys, Golden Globes and Tonys. Today he manages nearly 50 website/blogs for both clients and magic as well as is a current member of Parent Assembly #1 of the Society of American Magicians. John writes the reports of meetings that are then published in S.A.M.'s national M.U.M. Magazine. After 10 years as the founder/producer of the Platinum PIA Awards he is now creating a new annual ceremony entitled The National Magic Day Awards also known as the Houdini Day Awards as seen at HoudiniDay.com. John also developed a website/blog for INVENT MENTALISM at InventMentalist.com. Recently, while in his 50's, Stamas went back to school and got a Bachelor of Arts Degree in Digital Media Entrepreneurship and a Master of Arts Degree in Arts Administration. He is an anti-agism advocate and founded and runs the freelancer collective USA HOW TO, a marketing, education and magic organization. John lives in Manhattan, NY with his wife and their 11-year-old daughter two blocks away from where Bess Houdini resided after her husband Harry died.