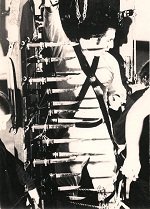 Norman Bigelow is a legend in the world of escapes. His show toured the world from the early 1970's well into the new century. He was the founder of Escape Masters, the International Association of Escape Artists, and was President of the organization from 1985-2001. Norman created David Copperfield's famous "Imploding Building" escape seen by millions on national television. Over the years, Bigelow has written numerous books and manuscripts on the art of escape and Harry Houdini and is considered by many to be the foremost authority on the subject.