Read What Jeffrey Ashkettle Is Saying 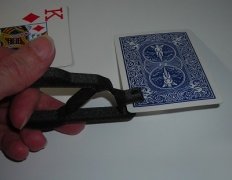 I finally got around to ordering this. I already own a PinPoint Pegger and was not sure if this would get much use. From the initial day of playing with different ideas using both, I am certain it will be used. The PinPoint Pegger has a more accurate X/Y adjustable axis rails but Blistr leaves an easier to feel bump (and does not accidentally go all the way thru. I guess with more practice that would change though). I will not compare them one to one because it would be an apples to oranges thing. Honestly, I already like them both the same and have different ideas for both. I did try the Blistr on all 4 corners and it did act very similar to a breather. I will have to dig out my allen wrenches and adjust the depth to see where I will like it set for the most part. The setting it came in works just fine so far but I was only getting an initial feel for it. If you have been on the fence (like I was since they first came out) go ahead and order it. You will find many fun and sneaky uses for it.

Lee Asher has a magical mind that never stops at "that's it" he always seems to be thinking "how can I go 1 step better?" Catch 33 is a great example. Not an everyday, run of the mill monte, but a well thought out and expertly taught routine. Lee has a gift for not being "just another". His DVDs are like short films with tricks instead of a set of hands and a close up mat with a musical track and voice over in the background. He really thinks it out (one step better). He has released several effects in E-Book format seeing this is where technology is taking us and this Catch 33 is a gem among monte routines. I have a passion for 3 card monte and its history. It has fascinated me for years and I have seen many effects used for "real" and for "magic". This one will not let you down.

Have this awesome ace production on Lee Asher's 5 Card Stud DVD and this is a great companion for easy reference points. Well written as all of Lee's PDF's are, easy to understand and when you get this production down... BOOM... you have a reputation maker. With as much as Lee has given to the magic community over the last decade or so, I have never found anything with his name on it disappointing. Just buy it.

This is a very clever move from one of the great minds in magic today. Lee Asher puts out some of the best effects and utility moves you can get. I have nearly all of his PDF's and dvds. All quality stuff and Losing Control does not dissapoint. If you are a beginner, you can do this and the experts can appriciate the simplicity of this great control. Buy it, you cant go wrong.