Some Total refined is simply a brilliant variation which can be performed without assistants. I have been performing the similar effect wherein volunteers call out digits in random order and it turns out to be the total of 5 five digit numbers previously sealed and handed to them. But I have always had to use a stooge as one of the volunteers to kick off this effect. Some total Refined enables the performer to get rid of this weakness. Congrats A K Dutt for thinking out of the box! 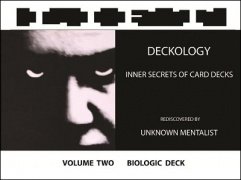 Deckology adds a brilliant dimension to mentalism with profound patter while performing with a deck of cards . In the Biological deck, the linkage of each of the 52 cards to the human body , could enhance the mystery of the effect and add to the impact of a revalation . Audience members would be in awe of the mentalists with the use of such patter that could portray a deep knowlege of the human body and anatomy .

I found the suggestive high impact phrases and psychological images very interesting .......and these could be powerful tools to add verbal and visual shine to performances !

I just purchased the Karma Deck PDF and I am absolutely excited to learn the methodology of the Memorized Deck. It is indeed a very clever and genius invention in bringing about a very easy way to memorize a full deck. The best part is that the gimmick is more a mental image rather than a physical object! Hats off to this brilliant invention of which I had no clue of before! No wonders Richard Osterlind has given it a thumbs up endorsement.