Read What Douglas Lippert Is Saying

I'm so glad Paul has decided to share more of his expert card technique with the magical fraternity. Paul is one of the top card magicians in the world and it shows when he tips his professional routining of such famous card effects such Lin Searles's "The Kannibal Kards," Nick Trost's "Brain Wave," Martin Gardner's "Spectator Cuts the Aces," and Steinmeyer's "9 Card Principle." But Paul really shines when he tips his own card magic. Lelekis's "Psychotic Bluff Aces" is not to be missed. The big Ace reveal at the end will floor them!

Paul's handlings are superb. But, what really stands out is his attention to detail to deliver maximum impact. These routines are not the work of a fly by night 12 year old card mechanic. Paul is a pro and you'll know it by reading his card handling tips. Paul's advice on how to perform the Ascanio Spread and the Olram Subtlety are worth the price of admission by themselves. The book is professionally produced and proof-read. An excellent addition to my magic library. 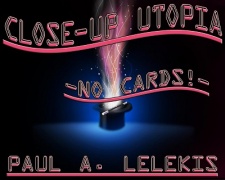 Another treasure trove of magical information from the fertile mind of Paul Lelekis. Paul's drops the real work on audience control and executing sleights for maximum deception and entertainment in his introduction. This is a masterclass in magic. Worth the price of the e-book alone.

Paul has carved a name for himself with his card work but here Paul is dipping in the well and tipping his non-card work which is just as exemplary!

Paul raise your prices! This stuff is too good.

IMPROMPTU MENTAL EPIC - Is a great way to do Mental Epic anytime, anywhere! I really liked that this version of Mental Epic is totally gimmick free with a clean, smooth, handling. This is going into my repertoire as a mentalism closer.

TORN & RESTORED STRAW WRAPPER - This is a classic of magic. I really enjoyed Paul's take on Skinner's take on Leipzig’s Torn & Restored cigarette paper. Paul has simplified the handling but retained all of the magic. This is just plain good magic. I love all the one liners that Paul provides for the patter. The #1 patter line is hilarious!

THE PHANTOM BILL - This is one of my favorite pieces of magic in this e-book. This is an epic version of the bill through bill. It's totally impromptu with borrowed bills. Paul's version utilizes little cover. The melt through looks like real magic!

PRESTO CHANGO AGAINO - Another gem of a routine from Paul. Finally gives us coin magicians a reason to dig out the old C/S coin. Paul goes for the spectator's jugular by providing 4 moments of high impact magic with a clean reset for table hoppers. I love this routine.

RESEALED CELLOPHANE - This is a clever routine that I can perform at parties "off the cuff" with a pack of cigarettes. Very simple setup and clean handling. Paul tips his clever presentation that justifies using cigarettes. A very visual routine for adults. Paul, give us an e-cigarette version!

CUT & RESTORED STRING- This is a cool opener for any type of ring and string effects. Simple to do but still magical. The best part is you end clean!

Hot Rod - Paul tips the real work on performing the paddle move that one only gains through years of performing this type of effect for real people. Paul tips a clever Melvin Burkhart subtlety. Worth the price of the e-book by itself! 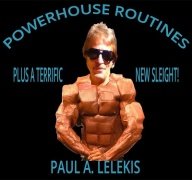 Paul's latest work, "Powerhouse Routines" would give the University of Alabama football team a run for their money. The introduction ALONE is worth the price of admission. Paul shares powerful tidbits about the importance of the spectator thinking they are the one creating the magic. It's not always about the magician! Valuable advice for all performers of the craft.

TELEPATHIC FOUR ACE REVERSE is a great routining and presentation for a clever Marlo idea from 1945. It's been updated with a better handling and great patter that makes this an entertaining piece of magic! This has become one of my favorite card reversal routines.

GRAVITY is a blockbuster sandwich effect with a great James Brown patter line idea. This routine has some finger flicking elements that are a joy to practice. Paul tips a clever idea to fool those in the know! I like this routine.

FIND YOUR OWN CARD is a great take on Marlo's classic, "Strike Three and Out." Paul has managed to improve the routine with a clever feint and add a ESP presentation that knocks it out of the ball park. The effect works itself and allows the magician to focus on the presentation.

THE TOUCH SWITCH is a clever way to switch out a card right in front of a spectator's nose. There are no angles to worry about. Paul's signed card switch is ingenious and a great way to finish an ACR whether it be card to pocket, card to box, etc.

If you want to perform close-up magic for a living, these six routines would be a great start! These routines come straight out of the working repertoire of a real magician's magician. Paul has won the Howard Bamman trophy for a good reason. This set of works is well, thought out, magical, and most importantly, entertaining! The presentations provided are excellent. Be sure to modify them to fit your personality though.

“Inspector #1953” - is Paul's entertaining routine for the classic thumb through shirt effect that's been performed on national television in Europe. He provides excellent advice in using this routine as an “in” for performing at restaurants. The method is simple but devious. Highly recommended. “The Trick That Can't Be Explained!” - is one of my favorite card effects from Paul's. If a layman asks you to show them a trick you'll be prepared. Even when they know how it's done it will still be magic! The best part about this effect is that it is totally impromptu and self-working. There are just a few procedures to memorize and then you're all set. “B-Fly” - is a very magical version of the Biddle trick involving an invisible card that gets some good laughs from your spectators. There aren't any tough moves to learn here and Paul describes a great feint by Paul Cummins. This routine is very practical and plays very well. This will get you the money in a professional setting. “A Devilish Miracle II” - This is a solid card effect that gets great reactions and multiple moments of magic. This effect is definitely one of the harder card effects in his notes and is for the experienced card magician. Paul expects the reader to know several card moves that are not explained. Paul makes use of several card sleights for maximum deception. Also, a great card sleight of Harry Lorayne's is explained. Another one of my favorite card effects from Paul!

“CAAN TU” - Card At Any Number has been all the rage among magician's for the last couple years. Paul's take on J.K. Hartman's CAAN is a beauty. I like how the double revelation catches the spectator's off guard. There's a lot of humor in Paul's routine which will help guide you in the right direction towards making it your own. There's a move involved in the routine that if you own JK Hartman's “CAAN Craft” you'll have no problem doing. In the “Post Note” of CAAN TU there's an excellent piece of advice for when a spectator names any card! Don't skip over this!

“Triple Revelation” - This is a great variation on Al Baker's “The Mind Reading Trick” with minimal props that fit in your pockets. I especially liked Paul's variation on the classic playing card force by Balducci. It breaks up the action to make it harder for a spectator to reconstruct the effect!