Read What Alfred Dowaliby Is Saying 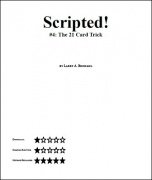 Today I acquired "Scripted #4: The 21 Card Trick. As a professional magician for over 20 years who believes that patter (aka script) and presentation are the most important component of selling a routine to the audience, I was delighted. Mr. Brodahl has combined and incorporated elements of deception, psychology, comedy, and what Dai Vernon called an "emotional hook," into this very cleverly devised routine. The 21 Card Trick is a very old trick and quite likely the first card trick learned by the overwhelming majority of people who try their hand at doing a card trick. In its original incarnation, it is still a baffling effect: After all, when asked in an interview how he got into magic, Ed Marlo said [paraphrased], "I saw the 21 Card trick and that was it; I never turned back."

Mr. Brodahl has cleverly camouflaged the fact that, in essence, the trick is the 21 Card Trick. The hook is a test of the spectator's psychic abilities which from the outset, diverts the focus upon it being a hackneyed mechanical/mathematical card trick. I am sure that, at least laymen, will not recognize it as the trick they themselves learned. Without the necessity for difficult or complex sleights, there are a number of ruses and deviations from the classic handling that create impermeable layers of disguise that will not be seen through by any but perhaps the most ingenious of observers - and that's what this script and routine created by Larry is: ingenious.

Postscript: Despite my many years in magic, I had never come across the Jay Ose false cut, which is utilized to great advantage in the routine. It is amazing and ironic to me that if the cards were cut into three piles (as in the initial part of the cut) and then reassembled "fairly," i.e., in a manner that would result in the cards being truly cut, it would look like a false cut, whereas when the procedure of the Jay Ose false cut is followed in the reassembly of the three piles, it looks like a real cut. I will be definitely using the cut in my card magic.