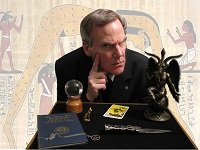 After passing by a chance to become a professional wrestler (seriously) and later a fire eater with a small-time traveling carnival (again, seriously)--two career decisions I still regret to this day--I wound up a professor of mathematics and somehow have made it to retirement. Proving theorems has been great fun over the course of thirty years, but I still sort of wonder what I've missed in the ring or on the midway.

My path to mentalism came by way of magic. The very first book I ever checked out from a public library taught me the cut and restored thread inside a soda straw. I was hooked, and by junior high was actually doing some sixty paid shows a year thanks to the proliferation of Christmas banquets, service club meetings and county fairs in those days.

There have been three signature events in my magic/mentalism life. First, a year or two before joining the IBM, I had the good fortune to witness Dunninger when Ring #167 of Des Moines headlined him on the gala public show at the annual convention in 1965. Not only that, I was chosen to be a member of the on-stage committee with Dunninger, and so got to see one of the titans in-front and up-close. He was magnificent.

Shortly thereafter, Bruno of Holland (who was by then head photographer with the Des Moines Register), took me on as a private student. Known as Gerard Bruning in everyday life, he was my inspiration, my mentor and, even though we were separated by thirty years of age, my friend. The world lost an elegant performer and meticulous teacher when he died at the all too young age of 49.

The third was joining the IBM in 1967 when I was finally of age.

Since retirement, I divide my time between researching mentalism in my large library, and learning Latin, a language I've always wanted to master.