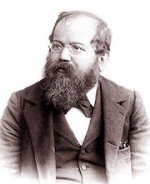 Wilhelm (later William) Steinitz was an Austrian-American chess player and the first official world chess champion. Known for his original contributions to chess strategy such as his ideas on positional play, his theories were held in high regard by such chess players as Aron Nimzowitsch, Siegbert Tarrasch, and Emanuel Lasker.

Steinitz began to play professional chess at the age of 26 in England. His play at this time was no different than that of his contemporaries: sharp, aggressive, and full of sacrificial play. In 1873 however, his play suddenly changed. He gave immense concern to what we now call the positional elements in chess: pawn structure, space, outposts for knights, etc. Slowly he perfected his new method of play that helped form him into the first Chess World Champion.

Steinitz elavated chess to a form of science. By isolating a number of positional features on the board, Steinitz came to realize that all brilliant attacks resulted from a weakness in the opponent's defense. By studying and developing the ideas of these positional features, he perfected a new art of defense that sharply elevated the current level of play. Furthermore, he outlined the idea of an attack in chess formed off of what we now know as "Accumulation Theory", the slow addition of many small advantages.

Though it was not immediately evident, Steinitz had just given the chess world its greatest gift. Though tactics were, and still are, the most basic element to strong play, his new theory gave greater opportunity to both defend and use the brilliant combinations the era was renowned for.

When he fought for the first World Championship in 1886 against Zukertort, it became evident that Steinitz was playing on another level. Though he suffered a series of defeats at the beginning of the match, it becomes evident when watching the games who understood the game better (for example, in the third game he was strategically superior but failed to pull it together at the end). Over time however, Steinitz's level of play continued to improve and finished with a solid victory(+10 -5 =5).

Tigran Petrosian once said about Steinitz: "The significance of Steinitz's teaching is that he showed that in principle chess has a strictly defined, logical nature."