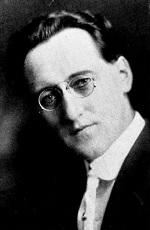 Pen name of Christian Andrew George Naeseth, aka "Newman the Great". Inspired as a boy by a medium, was a hypnotist, and magician "Harry Heller". Learned at age 10 from magic books and a magic set. Debut at age c13 as an amateur mentalist and magician. Pro mentalist and hypnotist since 1896 as "Newmann the Boy Wonder". Reinvented contact mind reading in 1896. Toured the small-time in the Northwest and West Coast. Invented no contact mind reading by 1920.

A major collector of magic books by 1916. Typically, his claim in 1937 that with "over 7,500 'publications' ... mine is the largest collection in the Western hemisphere" remains unproved and probably false. That he had a vast accumulation, including many books on hypnotism and the occult is undoubted, but his magic collection, much of which he sold off piecemeal (including some items to McManus), was at best a "strong" magic collection (at least 1,600 titles in 1,800 volumes) with many desirable but not so costly titles.