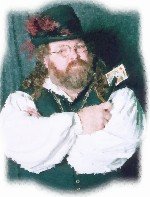 In the summer of 1971 a small boy walked into a magic shop where he purchased his very first trick. It was to be the pivotal point in the young mans life and start him down the path of fame and fortune. Today that boy has grown up to be a very successful magician who has appeared in top venues all around the world.

The story of the chubby kid who was standing behind the small boy in that magic shop in 1971 is slightly different.

He was to become Master Payne and even though fame and fortune has successfully eluded him thus far, his story is no less important, though perhaps slightly less impressive.

He left that shop, tricks in hand, and returned to his small hometown stuck firmly in the center of Washington State. The bite from the magic bug was slowly starting to fester and beginning to itch. The next few years of his life were fairly typical. Magic books were checked out from the library, magic props were bought with hard earned money or attempted to be constructed from materials on hand and the occasional run of the mill magic show was inflicted upon the unsuspecting.

All this however was to change when he became involved in a historical re-enactment club, moved to Seattle and studied under the renown orator and vaudeville artiste extraordinaire Reverend Chumleigh.

Master Payne now specializes in thematic character driven magic presentations. His character of Master Payne, a mediaeval jongleur has been a primary attraction of Camlann Mediaeval Faire for nearly thirty years. He has also taken this character to England twice, performing at various festivals and Great Houses, and even once to Guam to perform at a Renaissance themed Art Festival.

For the last decade or so he has been presenting shows for various library systems around Washington State based on their Summer Reading Program Theme. Thus far he has appeared as Hieronymus Payne, a Wizard from Hogwarts, Professor Payne a Poe Scholar, Calamity Payne, King of the Cowboy Conjurers, P.T. Payne, Flea Circus Proprietor and P.I Payne, Private Eye.

In 2005 he won the coveted Gold Medal at the PCAM convention with his renaissance cups and balls routine. Payne also made the cover and was featured in Oracle Magazine in 2008. He has also had original effects published in Magic, MUM, The Linking Ring and the coveted Learned Pig!