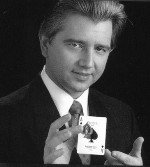 Stage name of Paul Joseph Gaertner. Learned at age 16 from library book and then lessons from Ron Slanina. Pro close-up since 1975, specializing in trade shows at which he is widely rated among world's top six, earning (in 1996) reportedly up to $2,500 per day. Taught Gary Michaels in 1975.