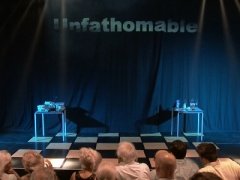 The True Secret of Mind Reading as Performed by the Zancigs
Laura G. Fixen
$7 ★★★★★