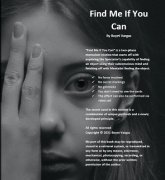 Find Me If You Can
Boyet Vargas
$10