Read What Marc DeSouza Is Saying

This review was first published in MUM July 2020:

The Fine Art of Magic is a true classic among magic books. Originally published by Fleming Books in 1948, it has remained a seminal text for generations of magicians. Although Jean Hugard is credited as editor of the first edition, he truly was the author, putting Kaplan's work to print. So many magicians have been inspired by this book, no less than Juan Tamariz, who penned the preface to this new edition.

I was pleased to take this opportunity to reread this book and was amazed to see how many now-classic effects are taught within. I also looked at the original side by side with this new edition to see what has changed. My friend Warren Kaps has done yeoman service in not only bringing the original back into print, but in adding much in the way of new and updated information. Many will long for the look of the original, but Lybrary has done a fine job of producing a very clear and clean layout that is easy to read. In addition, a bolder, clearer font is used. The original Frances Rigney illustrations are still here, but are augmented by additional illustrations by Tony Dunn that capture the same feel of the originals.

Reading Kaps' forward to the Second Edition lays out not only his goals, but much about the original edition. Rather than focusing on each chapter's contents and revisions, let me make an overall statement that applies to everything in this book. By using Chapter One on the corner short as an example, one can see how much has been added or revised for modern day techniques and advancements. The new title is "Corner-Short and Breather," making the case for the new editor's preference for what was really arcane knowledge of the day of the first edition, but is now a well-known tool. Kaps gives an analysis of why he prefers the newer technique. Throughout the book there are additional credits and references to newer sources for additional information on the effects and subjects noted. There are several new effects and added commentary, along with newer, better handlings for previous entries. I might add that these references are by no means voluminous and are generally acknowledging a limited grouping of more well known published works of recent vintage.

There is also a new chapter added titled "Amusement Area" that contains a number of stunts and bar bet type novelties. In Chapter Twelve, "Concluding Observations," Kaps appends a number of his own to Kaplan’s original entries. I would have preferred that he notate which were his comments versus the originals, but that is a small criticism. All in all, both of these gentlemen have provided excellent commentary.

I would be remiss if I did not at least provide a list of some of my favorites from the book. Will O' The Wisp is a fine Cards Through Newspaper assembly, later popularized by Albert Goshman. The Stop Fan Discovery is a superb forcing tool that is still in use by many. The Giant Trio Flight is a stand-up version of Cards Across using jumbo cards and envelopes that might enjoy renewed interest, along with a great handling for Card in Balloon. The Spirit Slates and Magazine Test is a favorite of Tamariz that also deserves more consideration. The Stack of Quarters has a great handling and one I use frequently. There is a superb copper/ silver handling of Sympathetic Coins. Kaplan’s routine for the Brema Bill Tube may well have you scouring your drawer for your set. For anyone considering The Bill in Lemon, you should certainly read and absorb the wonderful details provided in this book. Finally, my favorite of this tome is certainly The Gypsy Thread. Despite numerous variations, this remains the seminal work on this effect and there are details provided here that have been forgotten. It has been a constant in my own performing repertoire for over forty years.

This book has been out of print for many years and has commanded high prices on the secondary market. This is not just for its collectible nature, but that it is a wonderful resource on great, performable magic. The fact that it has been reprinted would be beneficial enough, but Warren Kaps and Lybrary.com have gone far beyond that goal. This edition deserves to stand right next to the original on its own as a new classic. Highly recommended. 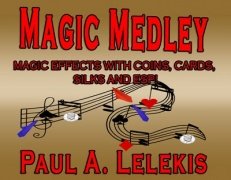 Magic Medley is Paul Lelekis' latest manuscript of, primarily, close-up magic. This well written booklet is 28 pages of very commercial magic. The skill level is from novice to intermediate. Paul begins with an excellent essay on taking control of your audience. This is simple yet important advice that all should strive to adhere to. The material that follows are mostly Paul's variations and personal handlings of some terrific magic created by others. Some are known, but most are hidden in the recesses of rarely referred to texts. There are four card routines (Miracle Sandwich is especially good, although a little challenging), three coin routines, a very strong Ring on Wand handling, a comedy silk vanish (spoiler alert, this involves exposure of a magic secret to your audience) and even a Blendo routine based on a Milbourne Christopher effect. Although these are not original effects, Paul always provides good crediting and helps rescue some great magic that might otherwise be forgotten. This is really good value for money, since you are likely to find something here to add to your own repertoire.

Here is another terrific collection of mostly close-up magic for the performers. Many of these are classic and neo-classic routines that have been created or used by others, but Paul gives us his personalized handlings that are obviously from the repertoire of a worker. Paul begins with some tips that offer some very sage advice for those who wish to perform for laymen. First up is EZ Cards Across, a very aptly named routine. I use Cards Across a lot, but mine requires several palms and holding out cards. Not so here; this version relies on subtleties and a very simple move. Close Up Color Changing Silk is next and this is a fun commercial routine well within the capabilities of most. Two Coins is a multi-phased routine with lots of action and a kicker finish. Nice thinking here. His EZ Torn and Restored Card is a very direct version of this currently popular trick. Despite the simplicity, it will get the job done and will fool laymen., His Wine Bottle Production is a nice opener for the stand-up performer. This would be a great way to lead in to a Coin in Bottle routine. Paul offers a very in depth tutorial on The Biddle Trick and it is a real winner...a worthy addition to anyone's close up repertoire. Under the heading Quickies, he offers many suggestions for both the technique and effects using The Top Change and Double/Triple Turnovers. In addition, there are several more card techniques and effects discussed. This is a bargain for anyone looking to add some new material to their tool box, as well as get some great insight into magic from a real pro.

This is a very enjoyable and eye-opening book. IT contains a number of really commercial routines for both the working performer and hobbyist. More importantly, it is chock full of very fine advice for magicians at all levels of skill and experience, as well as some fine techniques. The majority of the routines in this book are based in tried and true effects that are in the "lexicon" of current magic, but he has a worthwhile tip, a nice script addition or gag or a change in handling for each of them. It is apparent that Paul is a worker and everything in this book is demonstration of that. There are some old chestnuts that Paul teaches in here that are well worth this second look. Even though you may think they are "old hat", look at what Paul has done with them and consider that he uses this material for "real people". Strong stuff here. There are several bonus videos that come along with this package and, although simply shot, provide more than adequate views of what he intends to illustrate. I especially liked the footage about the three passes he uses. These techniques take work, but use these videos as a good guideline of what they are supposed to look like. All in all, I think Osmosis II is a great value and should be acquired and absorbed by any magician who wants to improve their performance skills and learn some great new effects too.

I had the pleasure of hosting Ben Robinson at our home/theatre last week, to deliver a lecture on the subject of this book, John Mulholland. He enthralled the entire audience for nearly two hours with stories of Mulholland's life as a performer, author, lecturer, editor and consultant to the CIA. As a bonus, he performed several of Mulholland's signature effects and even taught one of them. All in all, a very informative, entertaining and fascinating evening for all. I highly recommend this book to anyone with an interest in magical history and if Robinson is appearing anywhere near your area, do not miss him.