Read What Tony Arthur Is Saying 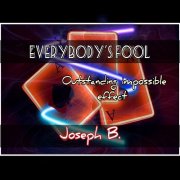 I’ve bought a few of Joseph B.’s effects now, and they are all good, usable, not very complicated tricks. The videos explain the methods used very well and you can be up running with them in a few minutes. This one is no exception. It will fool pretty much anyone who’s watching it ....

... except perhaps for people who have bought one of his earlier tricks, because my criticism – and the reason I can only give it 3 stars – is that it’s basically an improvement on the method used in one of his earlier tricks that I’ve already bought. That’s not itself a problem, people improve existing methods and remarket them all the time, but I take issue with the fact that he calls it “revolutionary”, because although I would even describe it as a really big improvement, in my opinion, it isn’t revolutionary.

If I hadn’t already bought that earlier trick, I would have been extremely impressed and would have given it 5 stars. It is a fooler, it’s well explained, and it will impress any audience. It fooled me, even though I had the earlier trick!

I wouldn’t hesitate to recommend this if it’s your first Joseph B. trick – just be aware that you might also be slightly disappointed if you already have the trick I bought!

Unfortunately, I am very disappointed with this effect.

While it is based on an interesting mathematical principle, the attempt to turn it into a magic trick is in my opinion terrible, and nothing that could be used in any kind of real environment. It is far too procedural to be entertaining, and in my opinion, would never produce anything like the audience reaction that the advert suggests.

More than that, without giving away the method, the combination of the names on the postcards, the way the postcards are arranged beforehand, the nature of the instructions, and the precise and exact manner in which they are delivered would make any audience scream "mathematical principle in play here".

If that weren't enough, the instructions are so exact and have to be followed while your back is turned, which means that the spectator could very easily make a mistake. Since you would have no way of knowing they'd got something wrong, there would be no way for you to recover and your big reveal would be totally wrong.

I therefore recommend against getting this effect.

I do however strongly recommend continuing to use this site, as I wrote a more detailed version (including my observations on the method) of this review to Chris Wasshuber after I bought the effect, and as part of his reply he said "I would also like to ask you to share your opinion in a review of the product. This would help others better understand if this is the right product for them or not. Also star-rating your purchases would be a great way to help weed out the good from the bad." This would suggest that Chris is a trustworthy seller who is concerned to make sure that his customers buy things that are right for them, rather than just wanting to sell things to us, and that's a rare thing in this internet world!