Read What Hans-Christian Solka Is Saying

The Cardsharp and his Book

Fascinating! Thrilling! Chris Wasshuber solved a more then 100 years old mystery. The search for Erdnase has been going on for decades. But at now the magic community may be pretty sure Edward Gallaway will be generally accepted as S.W. Erdnase. Chris Wasshuber can even explain the name S. W. Erdnase. Erdnase actually comes from the German words Erd (earth or soil) and Nase (nose). Chris Wasshuber explores Gallaway's opportunity, motive and means to prove his theory. Gallaway must be S.W. Erdnase! 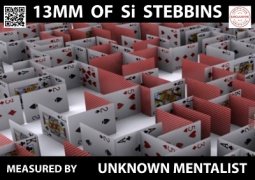 I read your book with great interest.

IMHO the 13mm approach is completely new for Si Stebbins. The approach is an elegant one. Easy to do and easy to remember. Thank you very much for sharing the idea with the magic community.