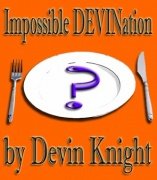 Publicity Secrets 1: How To Stop A Moving Car With Your Mind
Devin Knight
$9 ★★★★★