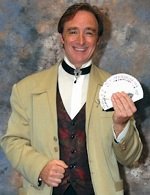 Elliott Smith has entertained corporations, television audiences and travelers across Canada, the United States, Europe, the Caribbean and Mexico for over 40 years. A member of the International Brotherhood of Magicians and the distinguished Order of Merlin Shield, Elliott has performed his special brand of magic and comedy for two past Prime Ministers of Canada, International Ambassadors, the late Liberace as well as Jay Leno.

His interactive magic brings fun and excitement to any event large or small. He is a master of stage and close-up magic, escapes and mind reading. Today, he continues to perform his own brand of trickery to wider audiences, but now on a whole new level - using his magic to provide team-building, sales and motivational training to companies and organizations of all sizes.

Elliott performed his successful stage show - ʻSmith & Quick in Mod-Vodʼ for a one month run at the Theatre du Casino du Lac-Leamy, at Dark Hall in Regina, for the opening of the new North Grenville Theatre in Kemptville, and as the headline act at Keyano Theatre in Fort McMurray, Alberta. Recently, Elliott performed a one month tour in Barbados entertaining at the Barbados Hilton, the prestigous Almond Resorts, the Plantation Dinner Club and for the Barbados Government to name a few.

Elliott was named and chosen as one of 'Ottawaʼs Top Fifty' influential people by Ottawa Life Magazine, was inducted into the Order of Merlin by the International Brotherhood of Magicians, was awarded the Order of Merlin Shield and nominated for Small Business of the year by Ottawa Tourism.