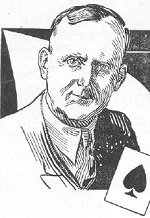 Inspired at age 6 seeing neighbor and amateur, Col. Gray, do a coin trick. Debut at age 20 at school show. Pro cardman for 6 years until 1911. Then as pottery factory executive in family business in Crooksville, Ohio.