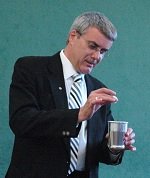 Dr Roger Woods is a lawyer, magician, musician, author, lecturer and publisher. He is a retired Solicitor and former Barrister at Law. He was a Senior Crown Prosecutor and a former Crown Advocate with the Crown Prosecution Service. He is an active Chairman of The Modern Mystic League (Blackburn & District Society of Magicians), which celebrated its 100th year as the fifth oldest magic club in the UK in February 2014. He has been President of the Society four times. He is also a Past President of the Northern Magic Circle (Frank Richmond Order), and a member of the International Brotherhood of Magicians (Order of Merlin Shield) and the Cavendish Knights of Close-Up Magic. He is an Associate Member of The Inner Magic Circle (AIMC with Silver Star) and was a member of The Magic Circle Ethics Committee. He enjoys performing close-up magic. He has also conducted extensive research on magical history and co-authored a number of books with Brian Lead MIMC. He enjoys visiting magic Conventions and always has a pack of cards handy. He likes helping fellow magicians increase their knowledge of magic. He also offers magic talks and lectures to clubs and societies. He won the Professor Hoffmann Memorial Lecture award 2015 from The Magic Circle for his lecture on "What are the ingredients of the 'perfect' magic trick?" which was published in The Magic Circular February 2016 issue and presented to The Magic Circle in March 2016.