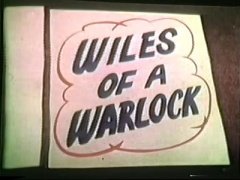 Wiles of a Warlock
Peter Warlock
$10