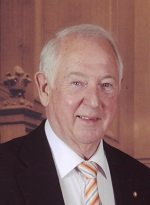 Tony Griffith was born in Romford, Essex on the 1st September 1934. He lives in Bristol, U.K. with his wife Judith of 45 years. He trained as a teacher and taught for 17 years, ending up as Head Teacher of a primary school in North Somerset. He left the teaching profession in 1986 to take up magic on a professional basis. While teaching he qualified as a soccer referee and received his M.C.C. Cricket Coaching Certificate from world renowned West Indian Cricketer Sir Garfield Sobers.

With 17 years teaching experience behind him Tony instigated his MAGIC OF SCIENCE show which he presents in primary and secondary schools and has visited hundreds of schools throughout the U.K.

He has vast experience having presented his magic in restaurants, television, trade shows, and the corporate environment.

Tony first visited the U.S.A in 1969 on a lecture tour. Since then he has visited the U.S.A over twenty times, and apart from lecturing to scores of magic clubs on that side of the big pond, has performed and lectured at all the major magic conventions on the North American continent. Other lecture tours have been to New Zealand (three times), Australia, Norway, Sweden, Denmark, Switzerland, Holland, Belgium, Germany and France. Needless to say, he has also lectured to most of the magic clubs in the U.K. He has lectured at The Magic Castle six times and has presented his Close Up Magic there over 100 times.

Tony is a Member of The Inner Magic Circle with Gold Star.