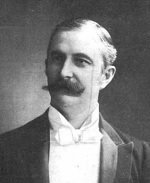 Raised in Chicago. Around age 20 moved to Rotterdam, Holland, to enter commercial business. Taught magic there in 1873 by David Tobias Bamberg. Took stage name of "Jasper Bamberg" to honor his teacher's ancestor. Then from 1873 to 1879 toured Holland, Germany (where he knew the Basch family), and Switzerland as correspondent for American newspapers and performing as a semi-pro magician. In 1891 also became a part-time publisher in Chicago as "The Clyde Publishing Co."

In 1895, having bought the magic business of Sid Macaire, Burlingame retired from performing to become a full-time magic dealer-publisher in Chicago (as "Chas. L. Burlingame & Co." and "Ralph E. Sylvestre" plus continuing with "The Clyde Publishing Co."). Sold this business in 1906 to Frank Ducrot (Brooklyn Magic Co). Father of Clyde H. Burlingame.

His strong collection of magic books and scrapbooks (begun in 1872 and seriously since 1895) passed to Dr. A. M. Wilson in 1918. Now in the Byron Walker Collection, making it the world's oldest.