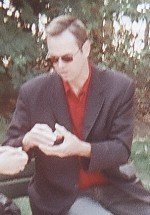 Hurt McDermott has provided the video accompaniment for famed Serbian-American Composer Natasha Bogojevich's BAJALICA, a contemporary music piece for solo wind player, electronic drone and motion picture, which made its world premiere tour of the Russia, Greece and the Balkans in 2007. So far it has been played in over 25 cities and theaters including at the Marinsky Theater in St. Petersburg. It has played twice in Chicago and is slated for a Boston premiere in March. Hurt has also provided the text for Bogojevich's ORATORIO, which has been produced in New York City and Belgrade.

Hurt McDermott's most recently completed feature film was festival favorite, NIGHTINGALE IN A MUSIC BOX. Among other prizes NIGHTINGALE IN A MUSIC BOX, which he wrote and directed, won the Jury Prize for Outstanding Screenplay at The Slamdance 2004 Film Festival and the Best Director Prize at The 2005 Shriekfest Film Festival. NIGHTINGALE, an examination of whether the notion of an individual human identity can survive all the technological interventions now possible into the mind, has also played quite a bit internationally including festivals in London, Athens and Israel. His new feature film entitled BLACK MAIL, starring Taylor Nichols, is premiering in 2010.

Hurt McDermott's plays have been produced in New York and Los Angeles as well as Chicago, where he received a 1999 Joseph Jefferson Citation for Outstanding New Work for his play WarHawks and Lindberghs. Other plays include repeat w/Madeline, which Daily Variety called an "hilarious and brilliant ... comedy", and Sleepwalker. His play Divertimento in Flat F was a SemiFinalist in the National New Play 2000 Festival. The Golden Watch Chain was nominated for the 2002 Kaufman and Hart Prize for New American Comedy. His "Fermat's Elevator" was a Finalist for the 2002 Heideman Award at the Humana Festival of the Actors Theatre of Louisville. Most recently his English rendering of Aristophanes’ BIRDS was produced by Chicago’s acclaimed TUTA Theater Company.