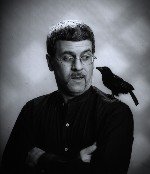 As a seven-year-old, Mark Piazza got hooked on magic when he saw a man in a corner store make a quarter disappear, and also when his father encouraged him to pick out a few magic tricks from a Johnson Smith catalog back in the sixties.

A graphic designer and love of comic books (Batman, Hellboy and The Sandman are his favorites), he has been performing magic for kids and magick for adults for over 20 years, in addition to creating some of his own routines.

Currently, he is working on a book of seances and, on the other end of the spectrum, a book of his unique kids' routines.