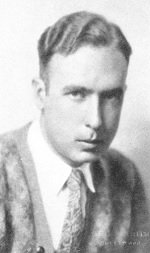 Amateur. Articles in Sphinx, most in collaboration with William Larsen Sr., since 1920. Aka "William Weber". Died in automobile accident. His collection of nearly 2,000 magic books and pamphlets went to his nephew, Bascom Jones Jr.