Read What Devin Knight Is Saying

This is a great opener for any show. I will be using this to open my mentalism shows. I can see this getting a great reaction from the audience. Not just a gag but a real fooler.

An interesting and fun read, well worth the low price. Experienced performers will chuckle as they will recall the same things happening to them. There were situations in this PDF I could relate to. 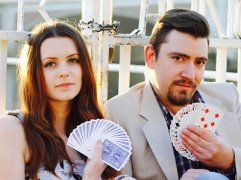 I was able to remember and master the code from the first watching without having to go back or take notes. OK, maybe I am an exception. If you have a good memory, you can learn this system from one viewing, although you may want to watch it several times. I will teach this to my girlfriend in a few minutes (the basic system) and then we will practice and practice the code. This will be in my spring mentalism shows. Highly recommended!

I am only giving this 3 stars because there is NOTHING new here. This is just a variation on a U F Grant idea that he put out in the 50s for fifty cents. It was called Fool-zum Newspaper Tear. The basic method and the pocket ditching is the same as in Final Edition. The only thing that Fox did was add the visible restoration idea, which is actually a Gene Anderson idea described in his Newspaper Magic. If you are familiar with Grant's Fool-zum Newspaper Tear, then you know the method. If not, this is worth buying because the secret is good even though Fox did not give either Grant or Anderson credit for using their ideas.

Vital information that should be read by any magician who does public shows. S**t happens and this shows you how to deal with it.

The greatest MAGIC story ever told! Abbott's changed the history of magic and it is all explained in this book. If you haven't read this from cover to cover, then you don't know your magic history.

The golf ball in glass was used on the Penn & Teller Fool Us TV show. The magician used a force to have an item chosen from a list. It was a golf ball. He showed a duplicate empty jar which was secretly switched. A golf ball appeared inside the jar; he showed it could not be removed, proving it must have materialized inside. (Otherwise, how else did it get inside the jar?) This was a clever use of this idea, showing how this impossible object can be applied to magic routines and not just as a novelty to look at. A clever idea worth knowing.

Probably the best book ever written on the presentation of magic! Chris has done the magic world a great service by making this available again. I remember reading this as a teenager and it changed the way I looked at magic FOREVER. If you wonder how I become so clever, well this book was the starting point. This should be required reading for anyone doing magic! My highest recommendations.

I remember reading this as a young boy interested in magic. I laughed my head off reading it again. Can't wait to try this bit again, especially good to have a friend stand up and say I know how that was done and give the explanation in x-jargon. This could be hilarious to an audience.

Although honeycomb hats are temporarily not available from the source given in the PDF. They are still available worldwide. You need only go to Google and search for China Honeycomb Vase Hat and you will find hundreds of companies selling the hats. In some cases, you can buy just one hat and get free shipping to the USA. This is a great alternative until someone buys the company and once again makes the hats available in the USA.

A very novel murder mystery routine that could be an act in itself. Makes the perfect party piece. A clever story, with the options for comedy that leads to a surprising and unexpected climax. This is something I will use and a real bargain at $4.00.

A Lifetime in Magic

This is a wonderful book on the life of Percy Abbott, it still leaves you wondering if he was a good guy or bad guy. The information that he shares about the famous magicians he knew is enlightening. Where people like Walter Gibson sugar coated the truth, Abbott gives the real low down and dirt on some of the people, including the ongoing disagreement between Howard Thurston and his brother, Harry. It is a shame that he didn't go into his falling out with Blackstone. There is little about the Abbott Magic Company, but he said if he lived, he would write about it. That never happened, still this is a must read for magic history buffs.

The out of print Klever Kard Kodes is worth the price of the book by itself. One of the biggest bargains in magic. Devin Knight 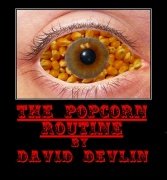 I just watched this video and it was entertaining with bits from the Simpson's mixed in. Dave has taken Ramsey's Four Bean routine published in 1952 and updated it. I am very familiar with Ramsey's method. Ramsey had you putting beans into your ears and eyes and spitting them out of your mouth. Dave has changed this a bit and has you putting popcorn kernels into your nose and one of them comes out of your eye during the routine. If you like GEEK magic, this is sure to freak out your audience. Although, there is nothing original in the methods, the video is worthwhile if you are into this kind of magic.

Eddie Joseph put in print probably the most detailed information on putting stuff into your eyes and removing it, but the printed description was hard to understand. On the video Dave gives you details, actually showing how to put the popcorn into your eye. This was very informative. He also gives you invaluable tips to avoid red and watery eyes.

As he points out in his video, you can do the whole routine or parts of it. His video comes out at the right time. On one of Criss Angels recent episodes of Believe, he does the bit where a popcorn kernel comes out of his eye. Magicians have complained that the stuff that Angel does on TV can't be done in real life (well, most of it). Here is an exception. Get Dave's video and when people comment about the Criss Angel Popcorn trick. You can do it for them.

If you have any interest in inserting stuff into your eyes for later removal then this video is a must have. Frankly, I am not into geek magic and would never do this, it is not my style, but for those who want to do this, you will find this video invaluable.

I now have a better understanding of how the eye trick works. Trying to follow Joseph's directions is something I would never have done. After seeing Dave show how it is done, I may someday try this.

Once you learn the technique you can do the thread from eye as done by both Blaine and Angel.

For those into this kind of stuff, then I recommend this.

This is by far the best book I have read on the Three Card Monte. Lee presents a routine that is action packed and entertaining the entire time. Loads of photos and embedded videos provide you with all the details you need. The torn corner ending is a real kicker. This is probably the most commercial version of a Three Card Monte exposed that I have ever seen. Highly recommended. It will take some practice to get this down, but it is well worth it. Once you get the routine pat, you will have a real worker.