The Cups: a manual of cups and balls magic
Roy Fromer
$2 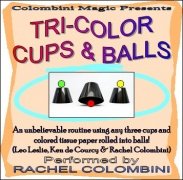