He was born in Dueren in the Rheinland area of Germany. A teacher in the public school knew a few magic tricks which Ted enjoyed so much that from then on, he pursued magic as his hobby -- much to the sorrow of his parents who energetically demanded that he should learn 'something proper.' So Ted Lesley first became an accountant and later, in Berlin, a tax consultant.

At this time, there was a well known night club, the 'Red Rose,' in Berlin. Ted Lesley visited it every night, especially if a conjurer was appearing there. Here he became acquainted with some very famous artists in this field, who gave him countless tips for what was then his hobby. Among these were such famous names as Dany Ray and Marvyn Roy, who performed for years at the Lido in Paris.

One day, the famous film director, Ottokar Runze, required Ted's help for an audit. On the occasion of the discussion of the audit, Ted's magic worked its wonders on the director so well, that on the spot, he offered him a major role in his film 'The Lord of Barmbeck.' Immediately after the film work, Ted gave up his profession in order to 'tread the boards which portray the world.'

Ted worked almost any type of venue - at conventions, in clubs and in hotels.

In 1992, Ted was designated 'Mentalist of the Year' with the 'Dunninger Award' in the USA. This was the first time this coveted 'Oscar' of mental magic had been awarded to a European artist. In 1993, the 'Magischer Zirkel von Deutschland e. V.' (Magic Circle of Germany) named Ted Lesley 'writer of the year' for his book Mental Mind-Ups. In 1997, Ted received the 'Leslie P. Guest Award' from the SAM. 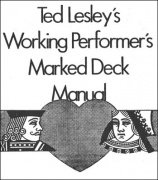